SMA Badminton Bash - Congratulations to all the winners. Kudos to Jeeth Yesudas for his Excellent Coordination & commitment. Thank you all the participants, volunteers, well wishers and sponsors who have helped us to make this tournament a grand Success. 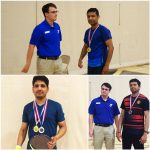 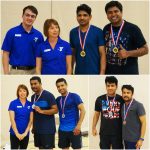 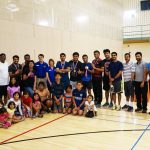 All the matches will be played at YMCA courts with Yonex Tournament Grade Feather Shuttlecocks. Shuttlecocks will be provided.
Participants will have to bring their own rackets. In case of any damage to the rackets during the course of the game and a player (or team) is unable to proceed due to unavailability of another backup racket, the opponents will get a walkover.
Walkover rule applies in the course of a player getting an injury during the course of a play too.
Participants will also have umpiring duty assigned. Expecting timely cooperation on all items as per the schedule.
All participants are expected to install 'Badminton Umpire Score Keeper' app for their umpiring duty.

Note: For morning slots, the time 5:45 denotes the first serve time, so players have to be there by 5:30 to do the required warm-ups and court setup.

Note: Due to upcoming Spring activities at YMCA, there may be timing changes for some slots which will be communicated accordingly.

Interval and Change of Ends

Qualifying criteria for next rounds

Top teams/players from each pool will proceed to the next rounds..
In case of any tie to determine the top teams or players in pool matches, we will check
the results of the matches between the deadlocked competitors.
Number of games won by them.
If the above conditions still fail to break the tie, the total points scored in all their matches will taken into account.